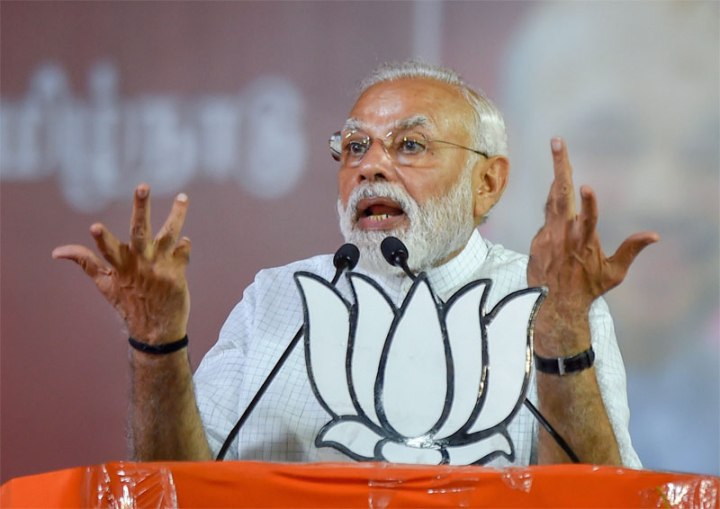 PM MODI INVOKES PULWAMA MARTYRS TO SEEK VOTES. IS IT TROUBLE TO MODI ?

AURANGABAD: Prime Minister Narendra Modi on Tuesday made an emotional appeal to first-time voters and urged them to dedicate their vote to the Balakot air strike and to the Pulwama martyrs. Seeking to reach out to first-time voters, a constituency BJP has sought to target, Modi said, “When you earn your first salary, usually you don’t keep it for yourself. You want to dedicate it to your mother or sister. Similarly, can you dedicate your vote for the Balakot strike, for the Pulwama attack victims, for pucca houses, for drinking water and to ensure that health services reach the poorest of the poor?” After complaints from opposition parties, the Election Commission late at night took cognisance of the PM’s remarks and asked the Maharashtra chief electoral officer for a report “at the earliest”.

The PM’s pitch came amid the opposition’s charge that BJP was trying to politicise the death of 40 CRPF personnel in Pulwama and IAF’s retaliatory bombing of JeM’s Balakot camp in Pakistan, and drew protests from Congress and other parties. Modi emphasised that debutant voters would feel proud of their choice. “Aap garv se keh sakenge… aap agar ‘kamal’ par button dabayenge, ya ‘dhanush’ par dabayenge, toh aap ka vote seedha seedha Modi ke khate mein janewala hai (You can say with pride… if you press the button on ‘lotus’ (BJP symbol), or on ‘bow and arrow’ (Shiv Sena’s symbol), then your vote will directly go into Modi’s account),” he said during a rally at Ausa in Latur district.

The EC’s response came after opposition parties said the “politicisation” of the sacrifices of security forces was deplorable and urged the the commission to take action against Modi. “Everybody knows why the PM is doing this. It is unfortunate that the EC is not taking any action,” former Union minister Kapil Sibal said. Congress spokesman Pawan Khera said the PM’s appeal to first-time voters implied that “he considers youngsters to be fools which they are not”. BJP’s other opponents also joined the attack with CPM rushing to the EC. In a letter, CPM politburo member Nilotpal Basu urged the poll panel to “strongly initiate” action to stop the election campaign from being polarised and vitiated. Former J&K CM Mehbooba Mufti reacted in the same fashion, while mocking the EC.

Modi was sharing the stage with Shiv Sena president Uddhav Thackeray for the first time after the 2014 polls. The emphasis that he was going to be the eventual beneficiary of the vote cast for the Sena candidate seemed to be aimed at motivating the BJP cadre who may be chary of supporting Sena candidates because of a long spell of bitter estrangement. By putting himself directly in the fray at Ausa, the PM also appeared to be trying to neutralise any discontent against the incumbent… rest all anti Indians are frustrated political parties. Modi addressed Uddhav as his “younger brother” and praised late Sena chief Balasaheb Thackeray. “Had he (Balasaheb) wanted, he could have become chief minister himself or could have made Uddhav the CM,” he said